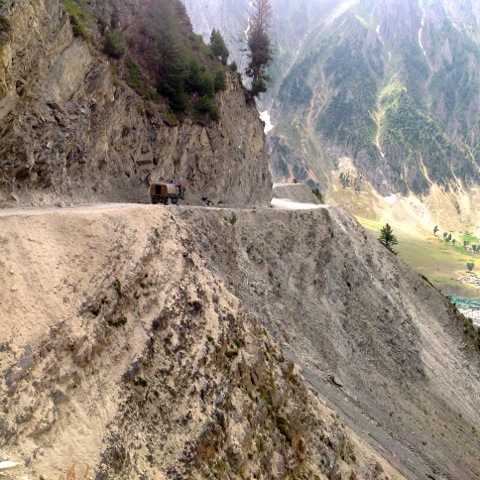 The journey of many crazy kilometres begins with a single email.

The land of many La(h)s. I didn’t know until we were preparing to walk up to, and over them that literally Ladakh meant “many passes” and they weren’t kidding.

I was in Dharamsala, Himachal Pradesh, India earlier in the year on a Uniting Journey tour with a small group. My partner saw the photos of the Himalayan backdrop in an email home, and he was already researching.

He had to be there, and soon. By the time I arrived home the flights were almost booked. Oh, and our good friends want to join us too. Well, why not?

I love to travel, and my tourist visa for India was still current, and my new friends in Dharamsala were happy to help plan the itinerary. So with a single email home, we were well on the way to this most remarkable of places.

We left from Srinigar, Kashmir in a whirlwind of excitement for the long road trip ahead to Leh and beyond and we were certainly not disappointed.

The landscape is majestic, as it is surreal. However, the roads are narrow, as they are steep. This kind of travel requires you to be so present and in the moment.

If you gave the apparent lack of consideration to road safety too much thought, you may well have just stayed on the houseboat in Kashmir. (but that is another story)

So the conversation went something like this; “I thought we made it clear that we wanted safe and slow drivers” “I know how to drive and this is not even close” and I’m guessing its pretty clear to you now what was happening.

One of us was most definitely feeling uncomfortable and concerned. The others were mildly bemused and occasionally shutting eyes, but the scenery was so spectacular that that really was out of the question.

One of us, felt they were right about how to drive and how not to drive, and they (our experienced local indian drivers) were incompetent and wrong.

So listening, and giving full attention to the concern was everything in this situation. Being present to the concerns and seeing the fear as they were discussed, but held ever so gently.

Occasionally catching a glimmer of a change of perspective, as we ALL agreed that he (our experienced  local driver) had driven Quite well today……..

In fact, at the end of the trip there was even a small acknowledgement that the drivers had learnt and improved along the way and maybe they weren’t so bad.

I for one, was very glad that our experienced local driver was driving our car, as we would still be in Kashmir if it had been up to me. Their driving skills were indeed quite exceptional and I will be eternally grateful for their care and skill.

Postscript on Kashmir
24 hours after we departed, for our road trip there was a military incident and there was an imposed curfew for a few weeks.

We also learnt that the cafe we had lunched in had, caught fire after we had left and the road was blocked for many hours.

Then of course we began another conversation about those what ifs?!!!!!

Jimi Hendrix and the Art of Conversation